In the last 20 years, we have seen the popularity of MMA, or mixed martial arts, skyrocket, thanks to widespread television promotion through officially recognized fight companies like the UFC (Ultimate Fighting Championship).

Since then MMA, and specifically associated martial arts like Brazilian Jiu Jitsu, have become popular pastimes all around the world, with people choosing them for recreational, self defense, and fitness purposes.

Even when you know what you need to be looking for, finding the right thing on today’s market can be stressful and confusing to say the least.

This is why we have collated what we consider to be the best five shin guards on the market today to make it easier.

So without further ado, let's get into the list!

First on our list are the Elite shin guards from Venum.

A prominent company in martial arts attire and equipment, Venum pride themselves on delivering quality products that won’t cost a fortune.

Available in a staggering 15 colors, these shin guards offer shin, ankle and foot protection to ensure you are protected and equipped for all eventualities of training and sparring.

Made of soft and durable polyurethane, a soft microfiber inner stocking, and available in a variety of sizes, the Elite shin guards are perfect for taking any punishment you throw at them, all while keeping you protected and comfortable for maximum functionality.

Next on our list, the shin guards from Elite are modestly priced and of high quality, meaning you don’t need to break the bank to get a functional product.

Available in black/white, black/red, black/blue, and all black, the design is stylish and understated, and the form of the guards are slim and molded to the leg.

Available in a variety of different sizes, the selling points the company prides themselves on are construction, comfort, reliability, versatility, and protection.

Made to withstand high density shocks, these guards are designed for longevity and protection, are adjustable for maximum comfort and functionality, and are versatile and suitable for a number of different martial arts, including MMA, Muay Thai, kickboxing, and many more.

The soft, breathable fabric and lightweight design also mean that freedom of movement won't be compromised, even during the most vigorous training regimes.

Available in six colors (black, red, blue, copper, green, and silver), as well as a range of accommodating sizes, the Hybrids from Sanabul are perfect if you want high quality on a budget.

Endorsed by Alan Jouban and “Sugar” Sean O’Malley, these guards really are tested by the professionals, giving you a product you know you can trust.

Versatile and designed for any combat sport, including Muay Thai and kickboxing, these guards pride themselves on letting you feel the impact but not the pain, helping to avoid nasty, avoidable injuries during the training process.

Made from engineered leather for added durability, you’ll be using these guards for years to come.

Available in black or white, and with multiple sizes to accommodate most body types, the shin guards from Meister really do offer sleek, durable guards for a very modest price tag.

Ergonomically designed and gel enhanced for maximum comfort, these guards fit the contours of the human leg perfectly, becoming an extension of you, instead of a cumbersome appendage.

Made from 100% cowhide leather, and lined with high density impact foam on all tension zones and sensitive areas, quality is what Meister promises, and boy do they deliver with these handsome guards.

The padding on the top of the foot helps provide maximum shock absorption, whilst the rubber dots on the under straps help to add grippage and stop slipping during sweaty training sessions.

For added comfort and protection, the Meister guards even come with gel molded soles designed to mold to your instep for added support and shock absorption during movement.

Last on our list, but by no means least, the MMA shin guards from Fiving come in three colors (red, black, and white), as well as a multitude of sizes to accommodate most body types.

Lightweight and constructed with optimal mobility in mind, the Fiving guards are made of high quality artificial leather,  have injection molded foam for better comfort and movement, and boast a contoured pad designed for a snug fit.

The no nonsense attitude of this product epitomizes the UFC, and prides itself on substance over style.

Of course, when it comes to purchasing your own MMA shin pads, finding the right thing for you and your needs can be a difficult task, especially with all the choices on today's market.

Before we show you our helpful guide however, there are several things you must consider before purchasing. 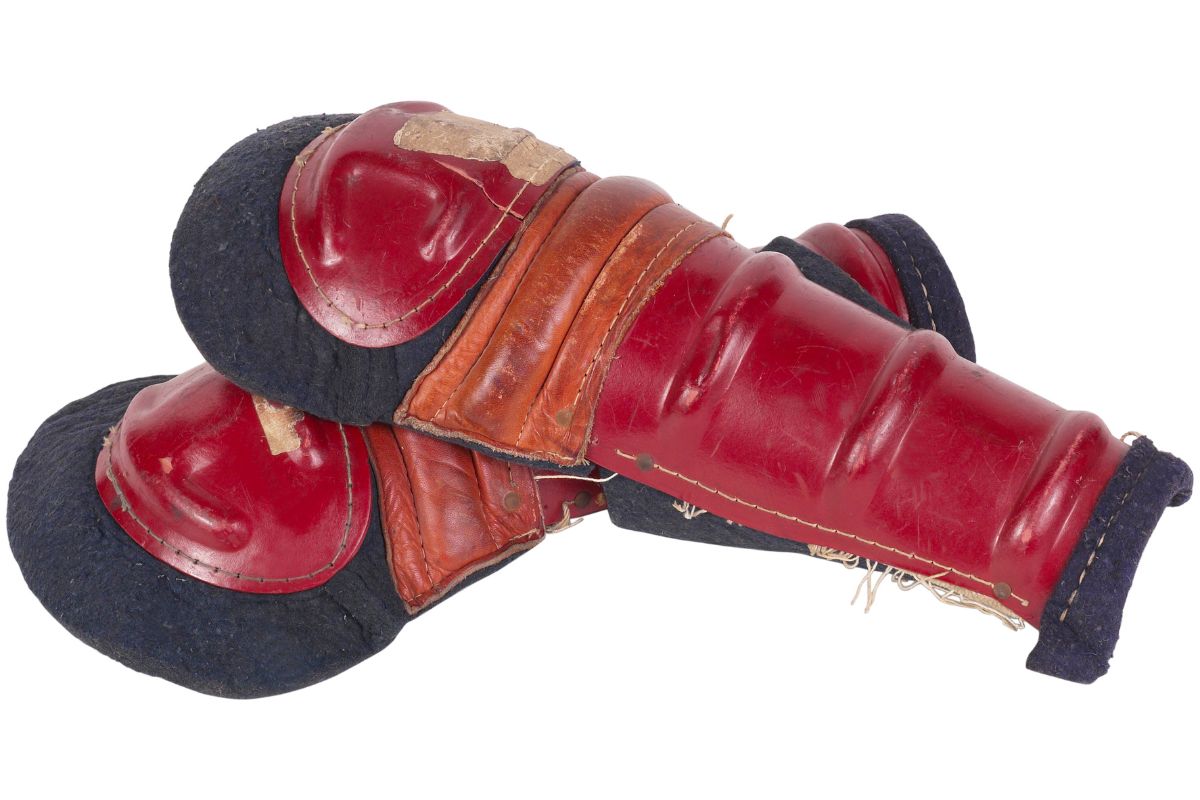 The design of the shin pads are obviously important. This can be broken down into various factors, including comfort, materials used, and durability.

They need to be nice to wear, not only for the comfort of the wearer, but also to avoid accidents, and chafing on the skin. They should also be well fitted to avoid movement and tripping.

The materials of MMA shin guards are generally a foam based protective layer around a harder inner protective pad, held in place with a cotton, stretchy sock-like attachment which goes around the back of the leg.

They also need to be durable and fit for purpose. After all, the nature of the sport means they are going to be kicked a lot by training partners and opponents, and as such they need to hold up to the punishment that will be dealt out.

When buying anything, price is always going to be an important deciding factor. However, the price should not be taken as a definitive indicator of quality.

Buying the most expensive shin guard will not necessarily ensure the best results, and similarly, opting for the cheapest one might not mean it isn’t fit for purpose.

Look for hidden gems, read the reviews online, and choose the right product for you and the specific needs you have. There are plenty of great mid range products on the market, all of them delivering the goods without breaking the bank.

Customers don’t mind spending money on a product, they don’t even necessarily mind spending a little more than they intended, but the product has to provide several things to be worth the cost: longevity, durability, and good craftsmanship.

If people have paid slightly more for a product, then the assumption is that the product will last them for a number of years, despite vigorous activity.

This doesn’t necessarily mean that a higher price tag will achieve this. The important thing is to look at the reviews themselves, and take note of common denominators in terms of longevity, durability and product quality, as these are the greatest indicator of truth.

The Early Days of “MMA”

The first written mention of the phrase “mixed martial arts” was as recent as 1993, when television critic Howard Rosenberg wrote it in a review of UFC 1.

The sport itself however, or rather, the practice of having a mixture of martial arts employed within a specific fight, comes from the Brazilian sport Vale Tudo, which literally means “no holds barred”.

Vale Tudo became popular in Brazilian circuses during the early 20th century, and quickly spread throughout the surrounding countries as a source of entertainment and excitement.

However, it wasn’t until 1958 when the term Vale Tudo was actually used, and the specific context of “style versus style” became the unique selling point.

This was featured in a Rio De Janeiro television show entitled Heroes of the Ring (or Herois do Ringue), and featured members of the famed Gracie family (Brazilian Jiu Jitsu founders and pioneers), as well as several legitimate practitioners of the countless styles featured.

From the 1960s through to the 1990s, Vale Tudo remained as something of a subcultural phenomenon based in Rio De Janeiro, based in small gyms and dojos around the city.

The aforementioned Gracie Family would also host several “Gracie Challenges”, wherein they would showcase the effectiveness of their patented Brazilian Jiu Jitsu (BJJ) against champions and proponents of other prominent world martial arts.

Thanks to a joint business venture between Rorion Gracie and American entrepreneur Art Davie, Vale Tudo was brought to the United States in 1993, in the form of the UFC 1.

As UFC grew in popularity, gained more sponsorship, and ultimately developed more rules than their initial three of “no biting, no eye gouging, and no fish hooking”, the essence of the no holds barred mindset held dear by Vale Tudo purists began to wain somewhat as the sport developed its own traditions and practices.

As the sport became more westernized, sponsored, and ultimately developed more rules and regulations, several changes were made to the once “no holds barred” style of Vale Tudo.

As MMA became its own separate entity thanks to the popularity of the UFC, these rules became more universal and widely known.

In MMA, every round is five minutes long, with a one minute break in between each. Non-title matches do not usually last longer than three rounds, whilst big money title matches can be sanctioned for five rounds.

This means that, unlike boxing, which can be a longer, drawn out experience, mixed martial arts matches are generally short affairs, consisting of several fights within one nightly roster.

This is one reason for the popularity of MMA gambling, because the high stakes, fast paced nature of the sport makes it much quicker and riskier than traditional combat sports.

The three judges use the famed “ten point system” commonly used in boxing and other martial arts, with the winner receiving ten points, and the other combatant receiving nine or less.

At the end of the fight, all of the scores are compiled by the judges, before revealing the final results.

The various results can be:

Of course, there are also numerous foul moves or practices that can garner a fighter negative feedback and scores.

These fouls can be deducted as points from the fighter’s overall score, and can seriously affect the results of the final decision.

With regards to uniforms, MMA also has its own set of rules.

Fighters must not wear gis, shirts, or long pants when competing, instead using approved shorts without any shoes or padding.

They are also required to wear lightweight, lightly padded gloves that allow some cushioning on the knuckles, but with the fingers free to enable grabbing and more sophisticated maneuvers.

Female fighters are required to wear coverings over their chests, and these must also be approved by the adjudicators.

As far as training attire goes, further padding is encouraged to avoid injury, such as foot protectors and shin pads, the latter of which is the subject of this article.

Which Is Better: Gel Or Foam Padding?

Both have their upsides. Foam is cheaper and generally more cushioned, whereas gel is more adaptive and better for shock absorption.

And there we have it, everything you need to know to find the perfect pair of MMA shin guards.

For further information, or if you’re still struggling to make up your mind, try asking a coach or instructor for their top recommendations, after all, they’re the experts, and can probably suggest something based on your specific style and needs.

If you enjoyed this post, you might enjoy our article on 'How To Flip Someone Over Your Shoulder'.