Taekwondo is one of the most popular martial arts there is, and it’s understandable to see why.

Contents show
1 How Difficult Is Taekwondo To Learn?
1.1 Kicking
2 What Will You Need To Focus On In Taekwondo?
3 How To Teach Yourself Taekwondo
4 How To Do 4 Basic Taekwondo Moves
4.1 The Front Kick (“Ap Chagi”)
4.2 The Standard Punch (“Jireugi”)
4.3 The Shoulder Throw (“Harai-Goshi”)
4.4 The Roundhouse Kick (“Dollyo Chagi”)
5 Final Thoughts

Not only is it a great way to stay in shape and improve your mental well-being, but it’s filled with lots of different types of moves – whether they’re kicks, strikes, or punches. 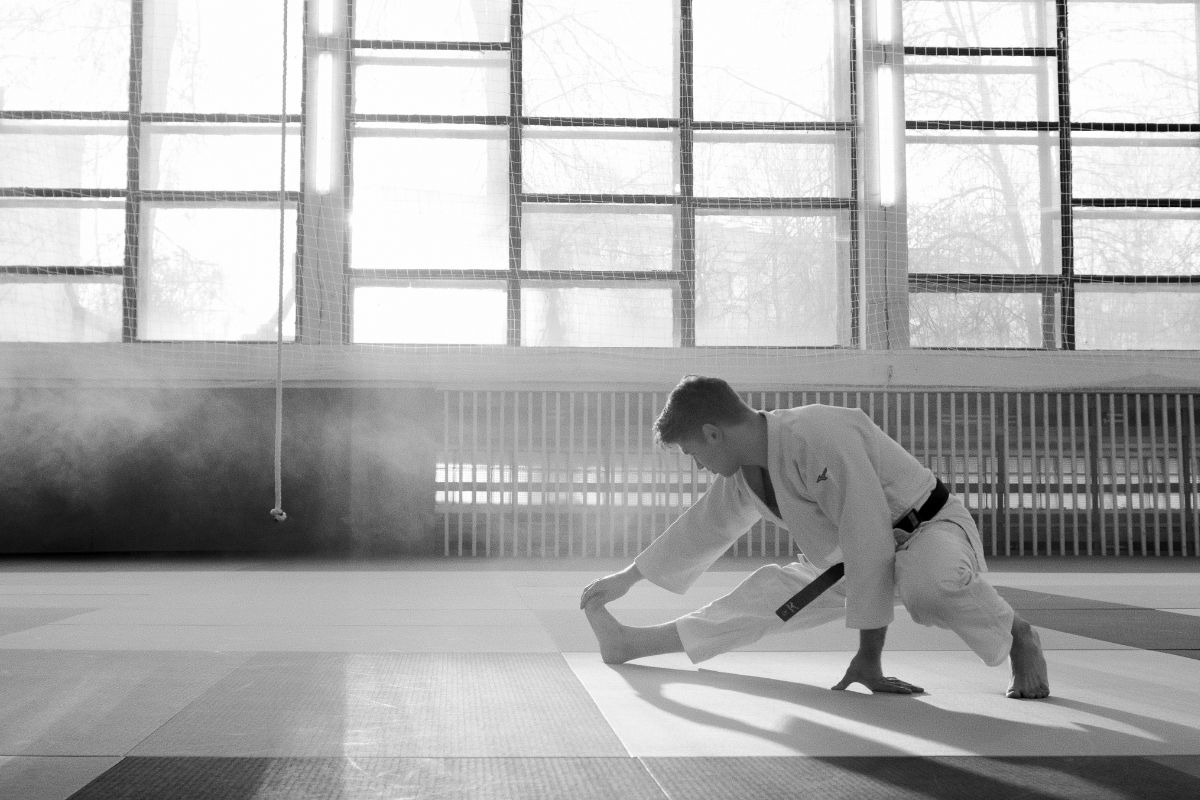 With that being said, you might not find yourself near a dojo where you could take Taekwondo classes. Either that, or you might not have the time or money to do such classes in the first place.

So, can you teach yourself Taekwondo?

The short answer is yes, but only the basic moves and fundamentals. On top of that, you’ll need a heavy bag for you to properly practice the punches and kicks on.

If you want to properly advance and evolve those skills, though, then you will need practicing partners, a proper setting, and Taekwondo classes and training sessions.

If you want to learn how to teach yourself Taekwondo, then we’ve got the guide for you! In the article below, we’ll cover just that, as well as explain how you can do some of the basic Taekwondo moves.

Remember, always practice safely and responsibly, and make sure not to put others or yourself in danger.

How Difficult Is Taekwondo To Learn?

When it comes to whether you can teach yourself Taekwondo, it’s all going to come down to whether the martial art itself is difficult to learn. Thankfully, Taekwondo is actually one of the easier martial arts for people to learn, which is likely a major factor in its popularity.

Another reason for its easiness is that a large part of it is the kicks.

If you picture a Taekwondo match, the image you have in your mind is probably a freeze-frame of an opponent performing a high leg kick, with their stretched leg frozen in mid-air.

Although Taekwondo also uses punches and strikes, its kicks are the most popular technique among martial artists.

Part of the reason for this is that they’re not as restricted as the punches. With the punches in Taekwondo, you’re not allowed to punch the opponent in the head or below the waist.

With the kicks, however, you’re only not allowed to kick below the waist – targeting the head (not too hard) is allowed.

On top of that, kicks will often get the highest points in competitions, too. For this reason, martial artists will regularly use them in matches, in an effort to win quickly.

But why does the reliance on kicks make it easier to learn? Well, kicks can easily be perfected with sheer repetition, and you don’t even need a partner to practice them with.

This means that you can practice them whenever you’ve got the time.

What Will You Need To Focus On In Taekwondo?

Besides kicking, you will need to focus a lot on flexibility if you’re going to get to grips with Taekwondo.

Taekwondo is a martial art that relies on you being flexible, because it has an enormous range of different attacks to use, all requiring your body and its limbs to take on different shapes and movements.

If you try to do some of these Taekwondo moves without being flexible first, especially the harder ones, then you’re running the risk of hurting your body.

This will not only be painful but will set you back a lot, preventing you from continuing your practices while you recover.

Flexibility is especially important when it comes to the wide range of kicks available in Taekwondo. If you look at something like a head kick, you’ll notice that it involves your leg shooting out at an extremely steep angle.

This will be impossible to achieve without the proper flexibility, and you’ll strain yourself if you don’t have that.

Additionally, there are flying kicks to learn too, which involve you jumping as you kick and flying through the air towards your opponent. This will require a good amount of flexibility to pull off properly.

How To Teach Yourself Taekwondo

When it comes to teaching yourself Taekwondo, you’ll first need a good amount of space at home. On top of that, you’ll need to buy a heavy bag to hang up, which you will then use to practice punches and kicks on.

However, where can you turn to learn the actual Taekwondo techniques?

Well, there are a variety of different sources on the internet that will provide you with a lot of help, either for free or at a price.

Everybody knows what a vast source of content and information YouTube is, and this is no different when it comes to learning Taekwondo.

You’ll find plenty of videos teaching you the basics, often taught by high-level instructors who demonstrate the skills repeatedly in easy to follow videos.

Online educational platform Udemy is also a great place to learn, with over 100 different courses on Taekwondo available. The vast majority of these come at a small fee, but there are a handful of free courses available too.

How To Do 4 Basic Taekwondo Moves

You’re only going to be able to teach yourself some of the foundational moves in Taekwondo, because the more advanced things will require training and other people.

With that being said, the basic moves are still essential to Taekwondo, and it’s very easy for you to practice them. We’ve got a simple breakdown of 4 key basic Taekwondo moves below, with instructions.

We’re beginning with one of, if not the, most notable Taekwondo moves: the front kick.

This is an essential basic move for any Taekwondo martial artist to have, and one that you can always rely on when you need a solid, simple kick.

To begin with, first step into a fighting stance. Your feet should be around two shoulder widths apart, your knees bent a little, and your body side-on to where the opponent would be.

On top of that, your hands should be raised to protect your head.

After you’ve got your stance, slide your left foot forwards, then change guard so that the right foot leads. Raise your right knee.

This will form a “chamber”, which is where your leg forms a square. After that, quickly shoot the leg out, straightening it and snapping the foot. Try to aim higher than your face.

Finally, withdraw the kick and plant your feet on the ground.

Again, enter the fighting stance we described earlier. After that, put your hand in a fist, then thrust it forwards to whichever target area you want.

This one needs a partner. Grab their lapel and step across, winding in, then bend your knees. As you do that, yank his lapel and bring them over your back. Be careful!

Form a fighting stance, but left this time. Then change guard, raising your right knee across your body. Next, twist on the other foot, and kick horizontally (again, across the front of your body) while snapping the foot.

You can teach yourself Taekwondo, but only the basic and fundamental moves. Use a heavy bag to practice on.