When it comes to Karate, while individuals tend to really enjoy classes and honing in on brand-new skills, it is the honor of receiving your belt that is truly the most exciting.

Earning your way to that coveted black belt is the dream of any Karate enthusiast. And there is nothing in the world that compares to when you finally get to see that black belt handed to you. 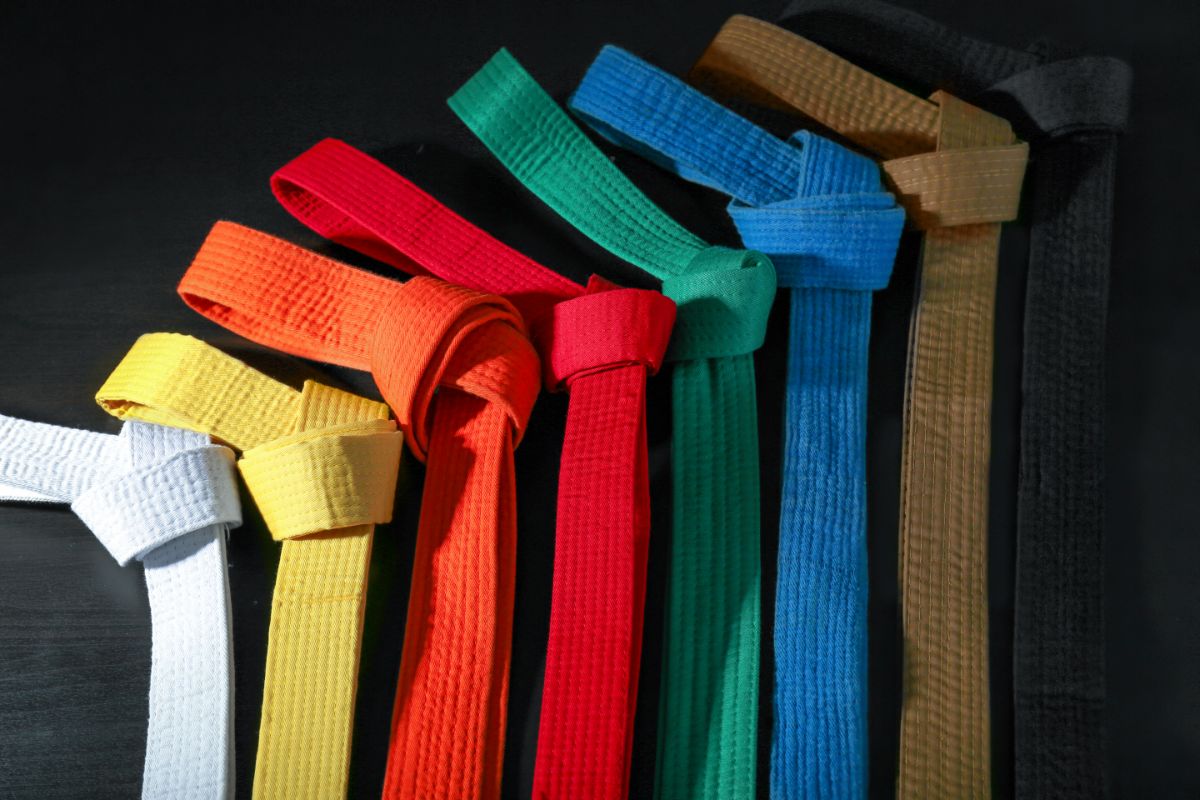 The only catch…it’s not easy to earn. It will take years of discipline and hard work to achieve a blackbelt which is why it is so converted.

And because it can take so long many can be tempted to find ways to skip belts in order to get themselves one step closer to that beautiful black belt.

And skipping belts is possible. But just because you can skip a belt doesn’t really mean that you should. If you are truly passionate about obtaining your black belt, you want to have earnt it.

After all, that is essentially what the black belt represents. All of your hard work. All of the skills that you have taken the time to master.

Skipping a belt isn’t technically cheating, but it can feel a little bit that way. Really, you should respect each and every belt color and want to work to achieve each and every one.

Karate is not a rushed sport, and if you’re looking for an easy road to success then it probably isn’t the sport for you.

The History Of The Karate Grading System

The system for grading belts in karate was actually inspired by a different martial art – Judo.

In a land and time long ago both sports were initially graded with the use of certificates to commemorate practicers’ achievements throughout the sport.

Then toward the end of the 1800s, Judo decided to introduce a white and black belt. Not long after other additional belts were added.

The lower ranking belts were actually brought in for Europeans where it was believed that they would not stick with the practice of the sport without adequate achievements to reach.

Basically, they believed that Europeans wouldn’t wait the time it took to acquire the black belt and so made more belts that were easier to achieve.

It wasn’t too long (around the 1920s) until Karate took inspiration from Judo and introduced the Kyu/Dan grading system.

In Karate, as a beginner, you will begin with a high kyu number and it will begin to lower as you become more advanced, each step taking you closer to that highly-desired black belt.

Once you receive your blackbelt you can then begin working towards dan ranks which start at a low number and work their way up.

There can be a little differentiation in color symbolism from dojo to dojo, however, below you’ll find the typically most common symbolization for each color. You’ll also see how long it should take you to obtain each color belt.

The White Belt (6th Kyu) – 3 months – This is the very first belt that you’ll receive when you begin learning karate. White is meant to represent the birth of a new life.

Those who wear this belt show that they have started their new journey in Karate life. It also represents being pure in nature.

The white belt is meant to represent your new commitment to the art and how you are set for personal growth from the practice.

The Yellow Belt (5th Kyu) – 6 months – This is the next belt that you’ll receive in karate after you pass your first examination. In your journey, this is the first ray of sun.

The yellow belt represents the fact that the practitioner has opened themselves up and has shown the first signs of progression in their martial arts journey.

The Orange Belt (4th Kyu) – 6 months – The next belt you receive is the orange belt. This belt is meant to represent your understanding of the distance you are making with your karate journey.

The sun’s rays now touch the earth and the field starts to become fertile.

The Green Belt (3rd Kyu) – 9 months – As you continue your karate journey, you are now becoming much more aware of your opponent and how they move.

This is represented by the color green as those fertile fields start to bloom.

The Blue Belt (2nd Kyu) – 12 months – At this point, you should now have a good understanding of both sparring and self-defense. This is seen as your awareness beginning to soar.

And this is represented by the blue belt where the student begins to look towards the sky for encouragement.

The Brown Belt (1st Kyu) – 18 months – At this point, you are now very much in control over the moves you are taught. You can quite comfortably take on a resistant partner.

In terms of symbolism, the fields are now ready to harvest and this is why your belt is brown.

The Black Belt – Minimum of 18 months But Potentially Longer – You have now been bestowed the honor of the black belt and you are truly competent in all things karate.

In terms of symbolism, you have the shadow of knowledge behind you – thus the black belt. 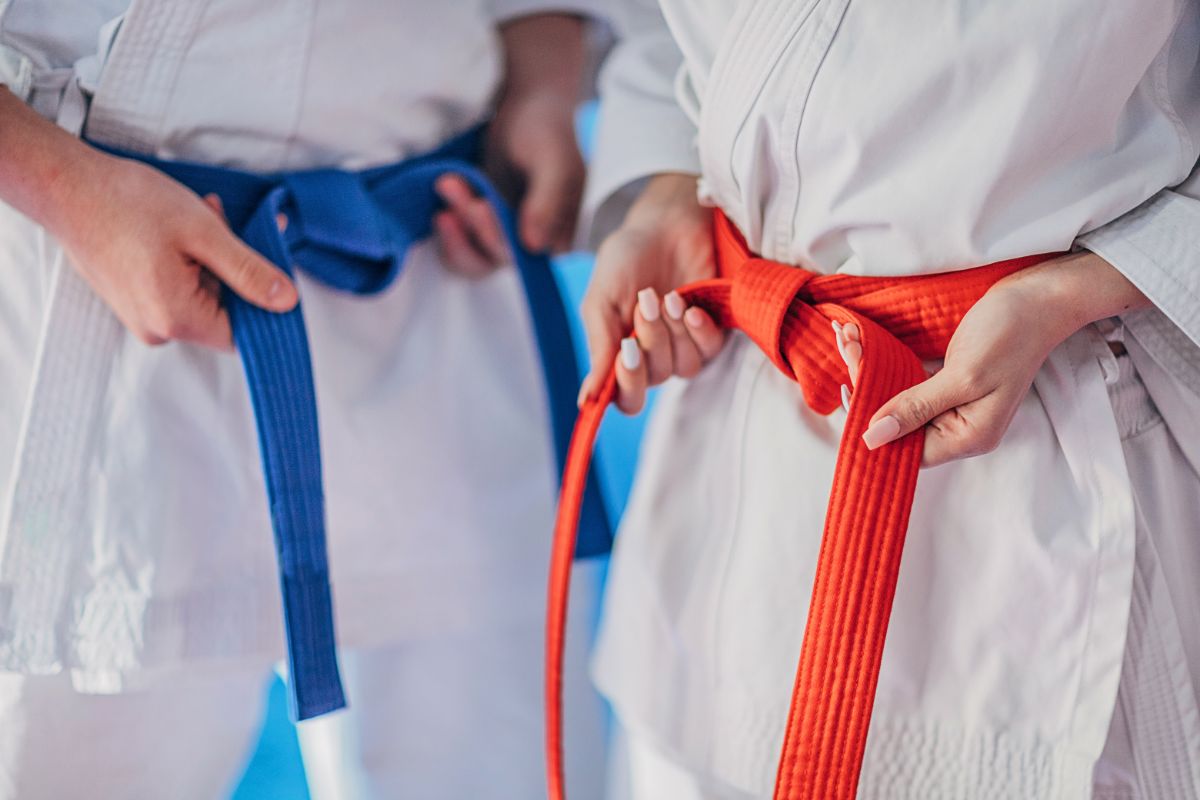 Any true lover of the art knows the importance of each and every belt, and therefore will not even consider skipping one of these belts. And, to be honest, a true dojo will not allow you to skip belts either.

Enter the rise of the McDojos. What this means is that essentially anyone can become a dojo due to a lack of standardization and then start their own karate classes.

In these classes, they often promise rapid progression through the ranks in return for money.

But I really wouldn’t advise this. There’s no dedication in it, no love, no passion, no heart. It is pretty much cheating, except you’re just cheating yourself.

There’s nothing to be gained from doing this other than bragging rights that you don’t really deserve. If you don’t take the time to earn each and every belt that you receive then you have not mastered the skills necessary.

Skipping belts in Karate really just makes a mockery of the system put in place and the sport as a whole.

And if you were then to go to a true dojo, they wouldn’t allow you to receive your next belt until you can demonstrate the skills that you obviously will not have learned.

It devalues the hard work of all those who have taken the time to rightfully earn those belts. And overall is just not well regarded.

As you can see, it is technically possible to skip a belt in Karate. However, it is very much frowned upon. And you won’t be able to skip any belts with any true dojo.

It’s important to remember that Karate is about more than just trying to obtain a belt. It is not so much about the belt itself but the hard work nd dedication that the belt represents.

And that determination, passion, and loyalty to such a sport can not be rushed or skipped.