Taekwondo is an interesting newcomer to the world of martial arts.

Contents show
1 Fundamentals Of Taekwondo
1.1 Taekwondo Strikes
1.2 Taekwondo’s Theory Of Power
2 How Often Do Knockouts Happen In Taekwondo?
2.1 How Taekwondo Is Use In Matches
3 Final Thoughts

While many other styles and forms have traditions and practices that go back centuries, we only have a recorded history of Taekwondo in its recognizable state going back as far as the 1940s, with it rising out of several different East Asian and Japanese martial arts styles in the Korean Peninsula. 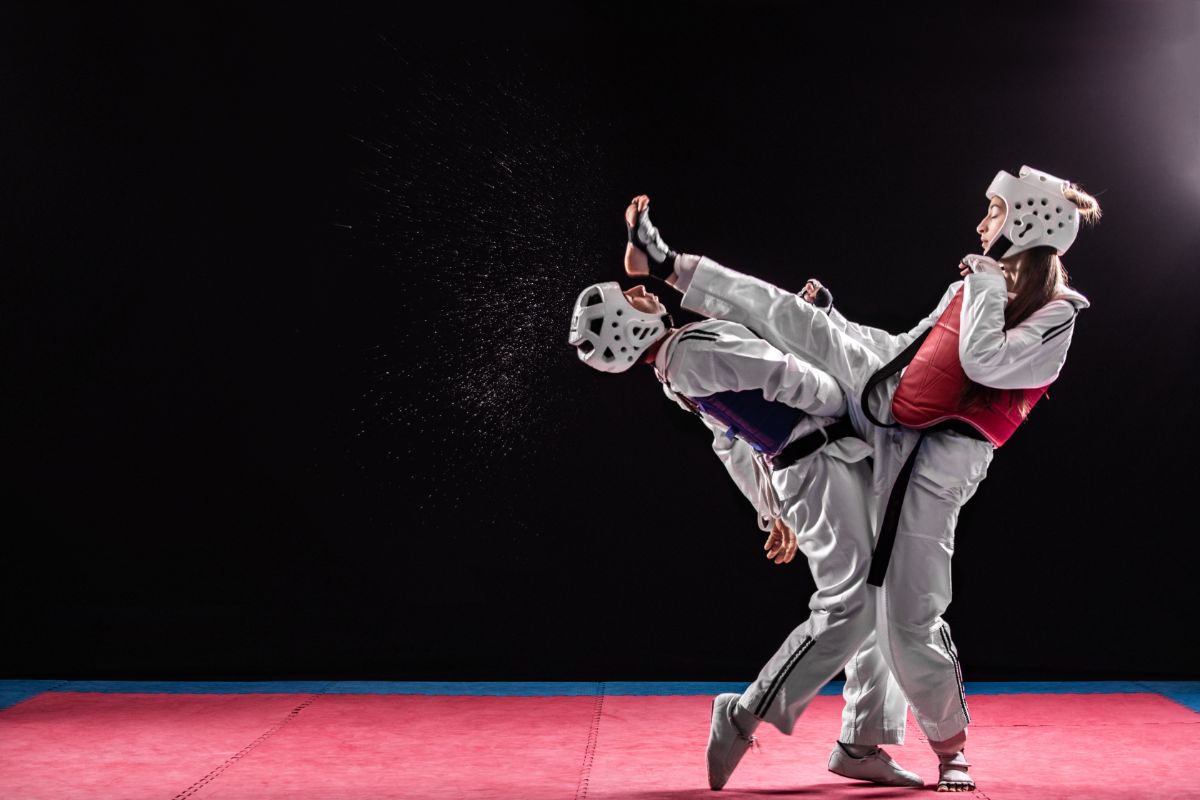 However, that hasn’t stopped it from becoming one of the most popular martial arts practiced not just in and around Korea, but across the world!

However, as a relatively new style of combat sport, it also means that there are a lot of people that aren’t exactly sure about when it comes to this form of fighting, such as how intense it can be. Which in itself often leads to the question:

Do people get knocked out in Taekwondo matches? And if so, how often does it happen?

Well, this is the question that we’re going to answer for you here, and take you through the basics of Taekwondo, as well as what to expect from sparring encounters of this kind of sport.

And, of course, we will answer the question of how often knockouts happen in Taekwondo.

The quick answer to this question is that there aren’t many if any, knockouts that happen in official taekwondo matches. But there’s more to it than that!

Before we start getting why there aren’t many knockouts that happen in Taekwondo, we should probably first discuss why this is even a concern for people in the first place, and where the strengths of this Korean martial art lie.

There are two main principles behind most forms and techniques of Taekwondo that are practiced.

The first is something that virtually any onlooker or observer of a Taekwondo match will know about, which is its preferred method of attack.

Virtually all strikes that are performed in this martial art are completed using primarily legs. Kicks of various types, heights, and angles are utilized in most matches. Certainly more so than in contemporary Karate or Judo, certainly.

To help facilitate faster kicks (an important detail that will become important in the next principle we cover), most stances and forms used in Taekwondo also prioritize narrower and taller stances to facilitate the better buildup of speed and power, which sets it even further apart from the lower, broader stances that you’ll find in martial arts like Karate.

The second, though slightly less well-known, main principle behind Taekwondo is its theory on how it utilizes the power in the human body with momentum to create the most effective strikes.

When Taekwondo was originally founded, one of its founding creators, the controversial Choi Hong-Hi (depending on which school of Taekwondo you speak to), chose to emphasize speed and power in the martial in its early days, basing this decision on both traditional Chinese martial art teachings, as well as his understanding of biomechanics and Newtonian physics.

Effectively, Hong-Hi observed that a kick or a punch that was moving faster speeds increased the effectiveness and kinetic energy of the strike more substantially than a limb with more mass.

This observation meant that speed was usually more important in Taekwondo form than power was, and still is.

To this effect, Taekwondo also makes use of the relax/strike principle being used in martial art, where practitioners would remain limber and agile before and after a strike, only tensing when a technique needs to be performed.

This allows a practitioner to conserve energy and remain limber and fluid in a sparring match, allowing for explosive bursts of speed when the situation calls for it.

This technique is often put to good use during sparring and board-breaking exercises, conserving energy until the last possible moment.

(As an extra note, a well-executed relax/strike technique is also quite an effective way to avoid potential injury when executing a technique, as the body allows kinetic energy to disperse better across a wider area, rather than tensing when attacked.)

How Often Do Knockouts Happen In Taekwondo?

So, with all the emphasis on speed, strength, agility, and, very importantly, high-speed kicks, you would imagine that there is a lot of potential for a single strong blow to the head or neck to spell the end of a match, with an out-cold knockout being the result.

And technically, the answer to that question would be yes, there is a real danger of knockout happening, at least in theory

On the sparring mat, however, things are a little different. The actual number of people that get knocked out during Taekwondo is still relatively low, despite it being practiced by millions of people across the world.

It is worth keeping in mind that, although there is plenty of potential for real-world application of Taekwondo in self-defense, it is primarily taught as a combat sport.

This means that, like other martial arts that use strikes, such as Karate, Taekwondo also places a great emphasis on control and precision in its technique.

Which makes sense, when you think about it. Considering the strength that can be found in your ordinary leg muscles (much less the leg muscles of a trained martial artist), a blow to the head or neck could have more than a few serious consequences for a target.

And it wouldn’t do well for a dojo to be constantly injuring its members, would it?

How Taekwondo Is Use In Matches

So, if knockouts are rare in Taekwondo, how exactly is it used in sparring matches without serious damage to each fighter?

Well, the match system in Taekwondo functions very similarly to the Kumite sparring system that Karate uses, where points are awarded to fighters depending on how well and effectively they can execute techniques, as well as landing blows on specific parts of the body.

The following points are given if a fighter can land a solid blow on their opponent:

As you can see, only one of these methods includes any blows to the head, with many other points being given for connecting strikes to the body rather than the extremities. And while head strikes are popular, they are by no means your only option in this sport.

So, as we have hopefully shown you well, knockouts are very rare in Taekwondo for several reasons, even though most seasoned Taekwondo fighters have more than enough power, speed, and training to do so.

The fact that most matches in this martial art are decided by gaining points through contact, rather than through a no-hold-barred fight, means that fights very rarely get to the point where knockouts are likely.

Couple that with some effective padding, and you have a tough, but safe, martial art to practice for yourself.