When it comes to learning a certain form of martial arts, one thing which people want to know is how long the matches will last for.

Contents show
1 How Long Is A Typical Karate Match?
2 Kumite Karate Timings
3 Kata Karate Timings
4 What Are The Standard Rules For Karate
5 What Is Not Allowed During Karate?
6 How Does The Karate Belt Order Work?
7 Summary

While you can learn a lot about a form of martial arts before you start learning, some information is easy to miss, and the length of a match is part of this, so if you want to know how long a karate match is specifically, keep reading! 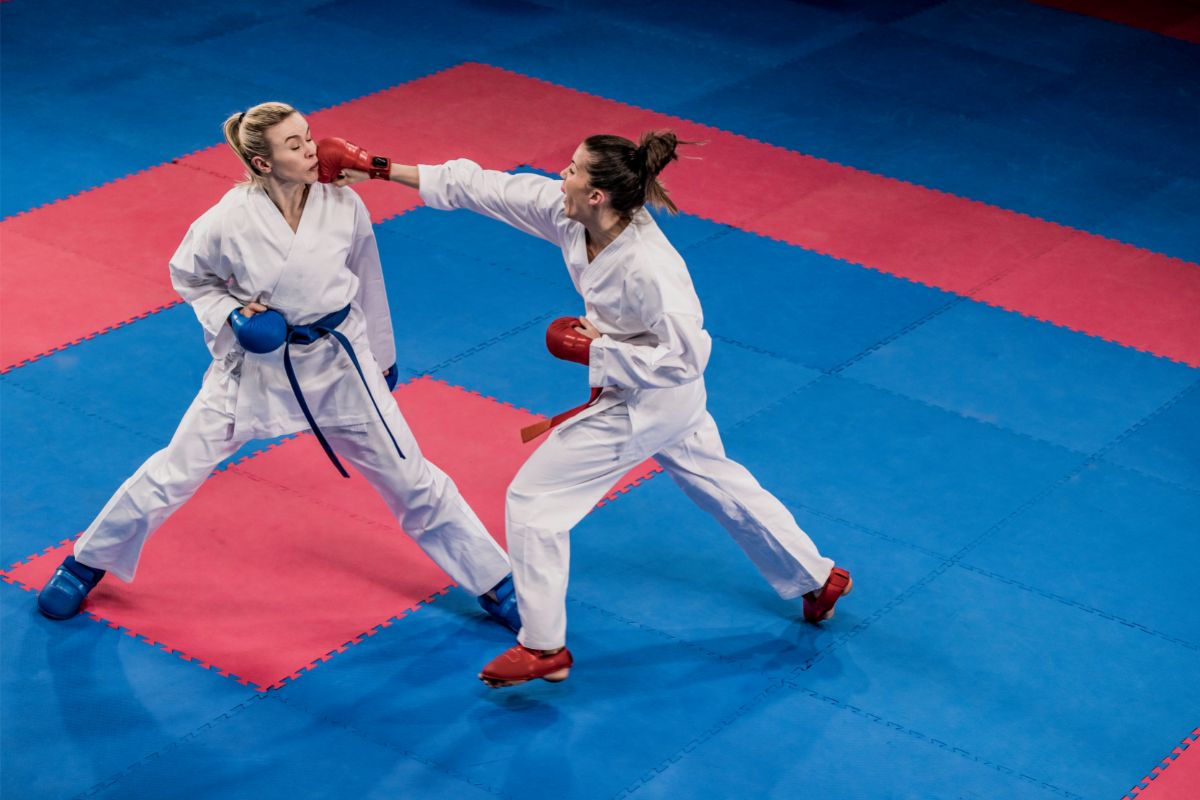 How Long Is A Typical Karate Match?

How long a typical karate match lasts will depend on which discipline of karate you are following. The two disciplines are Kumite and Kata, and both of them have different rules.

The time it takes to complete a match will also greatly depend on whether you are doing an individual event or a team event.

When it comes to kata events, the individual match will not be any longer than 5 minutes, and this is actually the same for a team event which will also not be over 5 minutes long.

For more information on the different types of karate and how this influences karate matches, keep reading to get all the information you will need!

In Kumite karate, you will be trying to punch as well as kick your opponents and this will help you get points which will lead to you hopefully winning the match.

In an individual kumite match in karate, there will be a 3 minute timer which will start to count down.

However, this clock can be stopped if the referee needs to intervene for whatever reason. In kumite the point ceiling is 8 points, so if you are able to get these 8 points before the end of the 3 minutes, you will have won this match.

However, what is more likely is that the match will go up to 3 minutes, and the person with the most points will win, it is also likely that the referee will need to stop the match for whatever reasons.

Occasionally the rules in kumite can change between gender or age categories.

Then when it comes to a team event of kumite, you will have 2 opposing teams which will have 3 member each, and then there will be 9 matches between the teams, and through these matches the teams will have the winner decided.

These matches will all play out like an individual match which last the standard 3 minutes, so if you multiply the 3 minutes, by the 9 matches, you will get a maximum fight time of 27 minutes.

In kata karate, you will not be sparring against another athlete, but instead you will be graded by performing a variety of moves in front of referees, and then the referees will choose to score these performances with grades.

This way both individual matches and team matches will take the same amount of time. These performances can be less than 5 minutes long, but if they go over the 5 minutes, there is a chance that you could be disqualified by the referees.

What Are The Standard Rules For Karate

What differentiates karate from some other forms of martial arts is that there is nowhere near as much focus placed on knocking out opponents, or trying to hit them at full force.

Instead, karate uses a scoring system which was previously mentioned. This scoring system was developed by the World Karate Federation and it is also regulated by them as well.

This is not how all of karate is scored, and there are versions which have a different scoring system, but most will use the system regulated by the WKF.

What Is Not Allowed During Karate?

When it comes to specific penalization in karate matches, there are more gradual steps taken, for example, you will have to make a very dramatic foul to get disqualified immediately, and it is more likely that someone will get disqualified after repeated smaller fouls.

When it comes to behavior which is prohibited, there are different categories.

The first of these categories includes techniques which essentially make excessive contact, this can also include attacks which are made to the throat, kicks which are aimed at the legs, strikes towards the groin, as well as instep stomps too.

You are also not allowed to do any open hand attacks towards the face of an opponent as it can endanger them.

The second category of prohibited actions are saved for actions which are not as related to contact which is made with the opponent.

This includes actions like exaggerated any injuries which may have been received. You could also purposefully exit the competition area and get a category 2 violation.

Generally speaking, category 2 refers to actions which include; clinching, passivity, grabbing, ignoring the referee, or taunting.

You can commit a few of this violations and stay in the fight, but if you do multiple, you are likely to be disqualified. 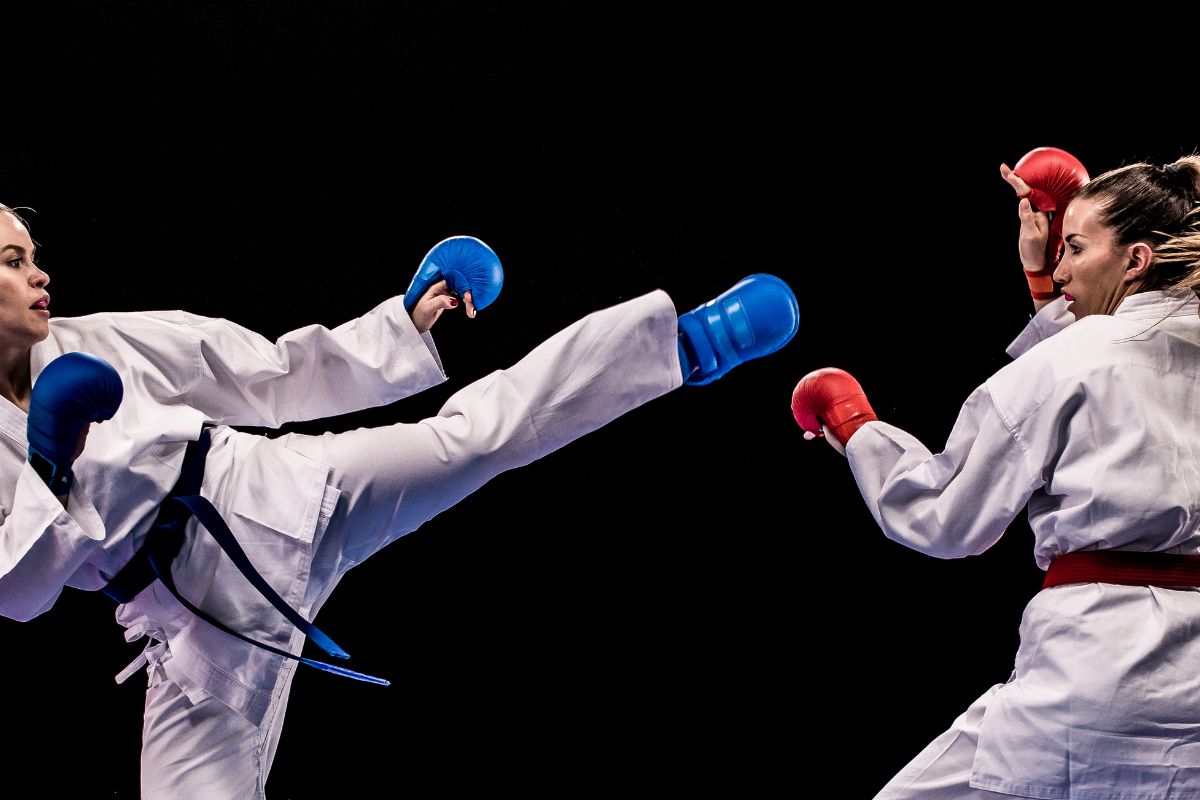 How Does The Karate Belt Order Work?

One aspect of karate which many people know about it is that it uses a belt system to symbolize progression and personal development.

These belts will represent the degree of knowledge which is shown in their karate.

There are 8 different colored belts in karate and they advance from beginner to advanced belts, the colors included go from; white, yellow, orange, green, blue, purple, red, and then brown.

These belts are used to represent knowledge and they are known as kyu, which is the Japanese word for grade.

While the martial arts have been practiced for hundreds of years, the belt system which is now quite widespread is actually quite a recent phenomenon which has only been used for a bit more than a century.

Before belts were introduced, certificates were used instead.

The first martial art to use colored belts was Judo which was introduced by Jigoro Kano.

It was actually inspired by a system represented in the board game go which is very popular and historical in Japan. The system was introduced to make it, so students would be able to easily identify their knowledge level and show progression.

After finishing the kyu set, in karate you can get the dan set of belts which displays different levels of black belt degrees, you will work your way up from a white level, to the 10th degree black belt.

Hopefully this article has given you an insight into some of the rules surrounding karate, especially those related to the timing of matches.

This is not something which is too difficult to learn, and you will be able to pick it up quite quickly. The timings of karate matches are never too long, and unlike some other sports, you will not have to spend too much time waiting.

As you can also see, there are significant differences between the timings of kumite and kata karate, so make sure you know which one you are doing!