If you’ve ever seen people performing Taekwondo, whether it’s while practicing it in a training hall or using it in a competitive match, you might have noticed that the martial art involves a lot of kicking.

In fact, most images you will see of Taekwondo are freeze-frames of martial artists mid-kick. 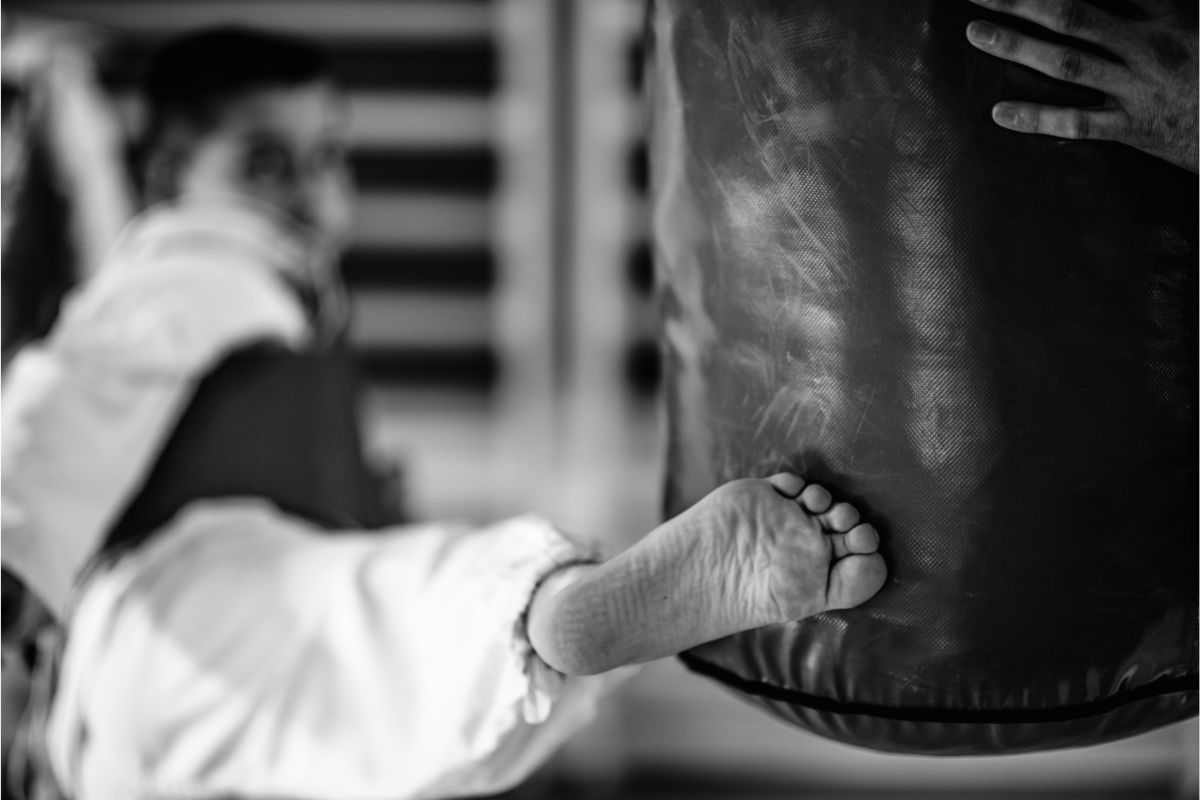 As a result, you might wonder: is Taekwondo all kicks?

The short answer is no, Taekwondo is not a martial art that only consists of kicks, because it also heavily relies on strikes and punches.

With that being said, kicking will earn a martial artist more points in a competition, so you’ll find that it’s used more frequently.

However, there’s plenty more to learn about kicks in Taekwondo, and we’ve got all the answers below!

In our handy guide, we’re going to look at the types of kicks that you’re allowed to use in Taekwondo, as well as some of the other types of attacks that are allowed. Read on!

Is Taekwondo All Kicks?

As we touched on in the introduction, Taekwondo is not a martial art based solely around kicking moves.

Even though the most common image of Taekwondo is somebody kicking, with their leg raised high, it’s far from the only type of move that’s allowed in the game.

In addition to kicking, Taekwondo participants are allowed to use punching too.

With that being said, punches are only allowed to be directed at certain parts of the body, being disallowed at the head and below the waist.

This can make it quite a limited type of attack, which is one of the reasons that kicking is the more popular form in the martial art.

While kicks are allowed to the head, though, they are admittedly not allowed below the waist.

While punching is a closed hand technique, open hand techniques are also used in Taekwondo, leading to other kinds of hand-based striking.

This gives Taekwondo martial artists even more room to experiment, yet still doesn’t stop kicking from being the most commonly used technique.

One of the key reasons that kicking is so popular in Taekwondo, besides the fact that it’s less restricted than punches, is that it’s the technique that gets the most points when it comes to competitions.

In order to win a competition, an opponent either needs to knockout their rival or simply score the most points. As a result, point scoring is a very important aspect of Taekwondo matches.

Since kicks are going to consistently get you the highest points, most martial artists will resort to kicks so that they can win quickly.

What Does Taekwondo Mean?

It may seem like an irrelevant question to ask, but the meaning of Taekwondo actually relates to what we’ve been looking at. The term Taekwondo is a combination of three other terms.

In this context, foot obviously relates to kicking, while first refers to punching. When it’s all put together, therefore, it broadly means “the art of kicking and punching”.

Since this is the translated meaning of the word, you can very clearly see that kicking is not the only technique used in Taekwondo, because punching also makes up a large part of its name.

What Types Of Kicks Does Taekwondo Use?

When it comes to Taekwondo, there is a wide variety of different types of kicks that martial artists are allowed to use. There are too many to list, but we’re going to look at a good range of them to give you an idea.

However, as you look through them, you’ll notice a theme of what is and isn’t allowed in Taekwondo: kicks are permitted to the head and body, but they are not allowed below the waist.

As a result, you won’t see any types of kicks that go for the areas below the waist.

You might be surprised to see that head kicks are allowed in Taekwondo, especially when you’re not allowed to punch your opponent’s head.

The reason behind kicks being allowed is that you get a point for a head kick simply by your foot connecting with the opponent’s headgear or face.

As a result, the kicks shouldn’t be hard or damaging, and so they’re allowed since the danger should be minimal.

As you can see, these kicks are pretty wide ranging, and they have all kinds of different techniques and skills required to pull them off.

However, the best Taekwondo martial artists will be experienced in all of them (not just the ones in our list) and will be able to perform them whenever they might need to in a competition.

As a result, let’s go through a couple of them in more detail. 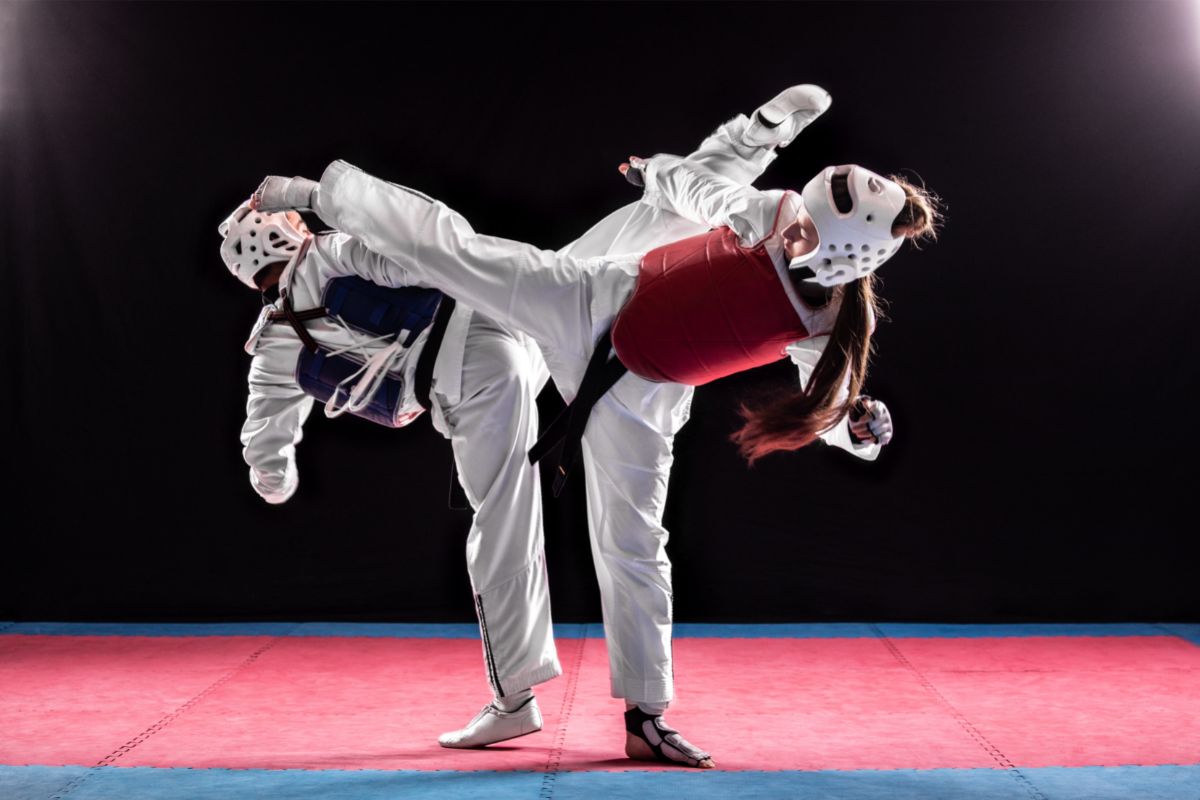 What Is A Crescent Kick In Taekwondo?

From our list, you will have seen that there are two types of crescent kick, with them being the inside one and the outside one.

As you can tell from the name, they both involve sweeping your leg around, almost in the shape of a crescent.

In order to do an inside crescent kick, first lift your leg against your body, making sure it’s across the centerline of your body. After that, sweep your leg outwards towards the opponent, connecting with them.

In order to an outside crescent kick, you do the same but sweep the leg inside towards the centerline.

In order to do an axe kick in Taekwondo, you want to first lift your leg vertically, and lift it as high as you can. After that, you try to bring your leg down against your target, attempting to strike them with the heel of the foot.

The reason for using the heel is because it’s a hard bone, which is going to be a much more effective and painful strike than if you were doing it with the foot’s ball or sole.

What Types Of Punches Does Taekwondo Use?

Just as there are lots of different types of kicks in Taekwondo, there are many different punches that can be used too. We’re going to look at a few of them now, but our list is far from complete.

How Do You Do A Fork Punch In Taekwondo?

If you want to do a fork punch, then you need to know that it requires two arms. Both of the arms are held next to each other, facing the opponent. Your body is turned to the side, which means one arm extends further than the other.

How Do You Do A C Shape Punch In Taekwondo?

A C Shape punch also uses two arms, though one is higher than the other in this case.

Taekwondo is not all kicks, because its martial artists can also use punches and strikes.